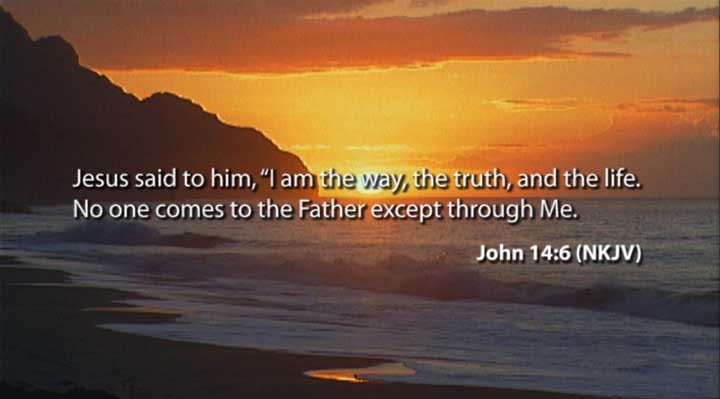 In the photo above, Jesus says

NO ONE comes to the Father except THROUGH ME.”

Jesus warns us that many will be DECEIVED…………..

Read on…….let us not be deceived.

The Signs of the Times and the End of the Age

3 Now as He sat on the Mount of Olives, the disciples came to Him privately, saying, “Tell us, when will these things be? And what will be the sign of Your coming, and of the end of the age?”

4 And Jesus answered and said to them:

“Take heed that no one deceives you.

5 For many will come in My name, saying, ‘I am the Christ,’ and will deceive many.

6 And you will hear of wars and rumors of wars. See that you are not troubled; for all these things must come to pass, but the end is not yet. 7 For nation will rise against nation, and kingdom against kingdom. And there will be famines, pestilences, and earthquakes in various places. 8 All these are the beginning of sorrows.

9 “Then they will deliver you up to tribulation and kill you, and

you will be hated by all nations for My name’s sake.

10 And then many will be offended, will betray one another, and will hate one another.

11 Then many false prophets will rise up and deceive many.

12 And because lawlessness will abound, the love of many will grow cold.

13 But he who endures to the end shall be saved.

14 And this gospel of the kingdom will be preached in all the world as a witness to all the nations, and then the end will come.

15 “Therefore when you see the ‘abomination of desolation,’ spoken of by Daniel the prophet, standing in the holy place”(whoever reads, let him understand), 16 “then let those who are in Judea flee to the mountains. 17 Let him who is on the housetop not go down to take anything out of his house.18 And let him who is in the field not go back to get his clothes. 19 But woe to those who are pregnant and to those who are nursing babies in those days! 20 And pray that your flight may not be in winter or on the Sabbath. 21 For then there will be great tribulation, such as has not been since the beginning of the world until this time, no, nor ever shall be.22 And unless those days were shortened, no flesh would be saved; but for the elect’s sake those days will be shortened.

23 “Then if anyone says to you, ‘Look, here is the Christ!’ or ‘There!’ do not believe it. 24 For false christs and false prophets will rise and show great signs and wonders to deceive, if possible, even the elect. 25 See, I have told you beforehand.

26 “Therefore if they say to you, ‘Look, He is in the desert!’ do not go out; or ‘Look, He is in the inner rooms!’ do not believe it. 27 For as the lightning comes from the east and flashes to the west, so also will the coming of the Son of Man be. 28 For wherever the carcass is, there the eagles will be gathered together.

The Coming of the Son of Man

29 “Immediately after the tribulation of those days the sun will be darkened, and the moon will not give its light; the stars will fall from heaven, and the powers of the heavens will be shaken. 30 Then the sign of the Son of Man will appear in heaven, and then all the tribes of the earth will mourn, and they will see the Son of Man coming on the clouds of heaven with power and great glory. 31 And He will send His angels with a great sound of a trumpet, and they will gather together His elect from the four winds, from one end of heaven to the other.

The Parable of the Fig Tree

32 “Now learn this parable from the fig tree: When its branch has already become tender and puts forth leaves, you know that summer is near. 33 So you also, when you see all these things, know that it is near—at the doors! 34 Assuredly, I say to you, this generation will by no means pass away till all these things take place. 35 Heaven and earth will pass away, but My words will by no means pass away.

No One Knows the Day or Hour

The Widow’s Two Mites
21 And He looked up and saw the rich putting their gifts into the treasury, 2 and He saw also a certain poor widow putting in two mites. 3 So He said, “Truly I say to you that this poor widow has put in more than all; 4 for all these out of their abundance have put in offerings for God,[a] but she out of her poverty put in all the livelihood that she had.”

Jesus Predicts the Destruction of the Temple
5 Then, as some spoke of the temple, how it was adorned with beautiful stones and donations, He said, 6 “These things which you see—the days will come in which not one stone shall be left upon another that shall not be thrown down.”

The Signs of the Times and the End of the Age
7 So they asked Him, saying, “Teacher, but when will these things be? And what sign will there be when these things are about to take place?”

8 And He said: “Take heed that you not be deceived. For many will come in My name, saying, ‘I am He,’ and, ‘The time has drawn near.’ Therefore[b] do not go after them. 9 But when you hear of wars and commotions, do not be terrified; for these things must come to pass first, but the end will not come immediately.”

10 Then He said to them, “Nation will rise against nation, and kingdom against kingdom. 11 And there will be great earthquakes in various places, and famines and pestilences; and there will be fearful sights and great signs from heaven. 12 But before all these things, they will lay their hands on you and persecute you, delivering you up to the synagogues and prisons. You will be brought before kings and rulers for My name’s sake. 13 But it will turn out for you as an occasion for testimony. 14 Therefore settle it in your hearts not to meditate beforehand on what you will answer; 15 for I will give you a mouth and wisdom which all your adversaries will not be able to contradict or resist. 16 You will be betrayed even by parents and brothers, relatives and friends; and they will put some of you to death. 17 And you will be hated by all for My name’s sake. 18 But not a hair of your head shall be lost. 19 By your patience possess your souls.

The Coming of the Son of Man
25 “And there will be signs in the sun, in the moon, and in the stars; and on the earth distress of nations, with perplexity, the sea and the waves roaring; 26 men’s hearts failing them from fear and the expectation of those things which are coming on the earth, for the powers of the heavens will be shaken. 27 Then they will see the Son of Man coming in a cloud with power and great glory. 28 Now when these things begin to happen, look up and lift up your heads, because your redemption draws near.”

The Parable of the Fig Tree
29 Then He spoke to them a parable: “Look at the fig tree, and all the trees. 30 When they are already budding, you see and know for yourselves that summer is now near. 31 So you also, when you see these things happening, know that the kingdom of God is near. 32 Assuredly, I say to you, this generation will by no means pass away till all things take place. 33 Heaven and earth will pass away, but My words will by no means pass away.

The Importance of Watching
34 “But take heed to yourselves, lest your hearts be weighed down with carousing, drunkenness, and cares of this life, and that Day come on you unexpectedly. 35 For it will come as a snare on all those who dwell on the face of the whole earth. 36 Watch therefore, and pray always that you may be counted worthy to escape all these things that will come to pass, and to stand before the Son of Man.”

37 And in the daytime He was teaching in the temple, but at night He went out and stayed on the mountain called Olivet. 38 Then early in the morning all the people came to Him in the temple to hear Him.

First Seal: The Conqueror
6 Now I saw when the Lamb opened one of the seals;[a] and I heard one of the four living creatures saying with a voice like thunder, “Come and see.” 2 And I looked, and behold, a white horse. He who sat on it had a bow; and a crown was given to him, and he went out conquering and to conquer.

Second Seal: Conflict on Earth
3 When He opened the second seal, I heard the second living creature saying, “Come and see.”[b] 4 Another horse, fiery red, went out. And it was granted to the one who sat on it to take peace from the earth, and that people should kill one another; and there was given to him a great sword.

Third Seal: Scarcity on Earth
5 When He opened the third seal, I heard the third living creature say, “Come and see.” So I looked, and behold, a black horse, and he who sat on it had a pair of scales in his hand. 6 And I heard a voice in the midst of the four living creatures saying, “A quart[c] of wheat for a denarius,[d] and three quarts of barley for a denarius; and do not harm the oil and the wine.”

Fourth Seal: Widespread Death on Earth
7 When He opened the fourth seal, I heard the voice of the fourth living creature saying, “Come and see.” 8 So I looked, and behold, a pale horse. And the name of him who sat on it was Death, and Hades followed with him. And power was given to them over a fourth of the earth, to kill with sword, with hunger, with death, and by the beasts of the earth.

Fifth Seal: The Cry of the Martyrs
9 When He opened the fifth seal, I saw under the altar the souls of those who had been slain for the word of God and for the testimony which they held. 10 And they cried with a loud voice, saying, “How long, O Lord, holy and true, until You judge and avenge our blood on those who dwell on the earth?” 11 Then a white robe was given to each of them; and it was said to them that they should rest a little while longer, until both the number of their fellow servants and their brethren, who would be killed as they were, was completed.

Sixth Seal: Cosmic Disturbances
12 I looked when He opened the sixth seal, and behold,[e] there was a great earthquake; and the sun became black as sackcloth of hair, and the moon became like blood. 13 And the stars of heaven fell to the earth, as a fig tree drops its late figs when it is shaken by a mighty wind. 14 Then the sky receded as a scroll when it is rolled up, and every mountain and island was moved out of its place. 15 And the kings of the earth, the great men, the rich men, the commanders,[g] the mighty men, every slave and every free man, hid themselves in the caves and in the rocks of the mountains, 16 and said to the mountains and rocks, “Fall on us and hide us from the face of Him who sits on the throne and from the wrath of the Lamb! 17 For the great day of His wrath has come, and who is able to stand?”